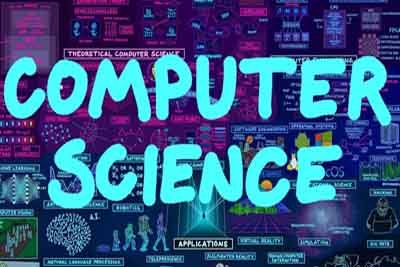 Computer science is the branch of science that allows the use of algorithms or programs to manipulate, store, and communicate data in the digital format.

The subject deals with the study of methods and processes to interact with data and then present the data to give an output. Like Michael Fellows said, “Computer science is no more about computers than astronomy is about telescopes.”

What are the different branches of computer science taught to students?

Is a specialized branch of computer science dealing with the design, execution, analysis, delineation, and categorization of different programming languages and their specific characteristic features?

Is about the study of digital computer organization in conceptualizing design and execution of fundamental operations of a computer system.

Is a branch of computer science that deals with the management of computer networks globally?

Is the study of the manipulation of image data to produce digital visual output? It is applicable in the development of video games and computational geometry.

Deals with the development of mathematical models and techniques for quantitative analysis of data for analysis and solution of scientific problems. It is used in real- life practical situations, to solve complex problems of different scientific backgrounds.

Is the most trending topic with a background in computer science? Artificial intelligence uses goal-oriented processes like decision-making, problem-solving, learning, adaptation of the environment and communication to replicate human communications and emotions in machines without human interference of any kind. Artificial intelligence has diverse applications but is mostly used for software development and development of robots.

Is the most common and opted for branch of computer science. It is the study of design, execution and modification of software to produce high quality, manageable, fast to build and affordable software. Most students choose software engineering as a career option as this course comes with a guaranteed job after the completion of the course and does not necessarily require higher education for making a career in the field.

History of the evolution of computer science in the education system

Computer science was first taught to select few students in a few schools in the United Kingdom. It was also known as computing, information technology, information and computing technology and computing. It was only in the year 1981, that BBC produced a course for both O level and level students. The development of micro-computer and classroom network popularized computer science as a course for the general students.  Once, its use was determined, computer science gained popularity and was then made compulsory at key stage 3 and 4.

United States of America started computer science with 14,000 school districts and a fixed curriculum. The 2010 Association for Computing Machinery (ACM) and Computer Science Teachers Association (CSTA) report concluded that out of the 50 states in the United States of America, 14 had adopted significant standards of education for computer science at high school level.

What are the best 10 computer science degrees to pursue online?

While the traditional school system has flourished for generations, the world is all hyped about online courses and degrees. The ease of learning at home without wasting time in adjusting to new environment and travelling to class, this seems to be the new hit among students. While it is quite difficult to pursue online courses for subjects who have wet labs associated with them, online courses have a major turn in for computer science. So, if you are planning to take up an online degree course in computer science, this is your go to manual for the choice of universities in the United States of America to apply to.

Offers a hundred percent online degree completion program in computer science for the bachelor’s degree. The program is worth sixty credits which can be completed in two years, unlike a traditional bachelor’s degree, which takes four years to be completed. The course structure is laid out in a form that it offers two courses per 7.5 week term and is continued for five terms in a year. Auburn is a well reputed university in the United States of America and is ranked below 50 according to the U.S. News and World Report. The low tuition fee for both in-state and international students, make Auburn University one of the few places that students often opt for.

Hosts an online computer science degree program for students who already have a bachelor’s degree. This master’s program is also designed for students who have all credits required for a bachelor’s degree sans the computer science credits. Oregon State University offers a fast track program to its students in which the course can be completed in a year with full-time online study. The U.S. News and World Report have ranked Oregon State University among the top 150 national universities in America. The university offers the same tuition to all students irrespective of their geographical location.

Is ranked to be the eighth in the United States among best online bachelor’s degree programs. Penn State’s world campus offers admission in different branches of computer science and has rolling admission in all the programs. The high acceptance rate of eighty eight percent and requirement of high-school GPA as low as 2.0, make this university opted for by many students. They also offer a full-fledged computer software engineering course in a full 126 credit bachelor’s online degree program. This university also offers the same tuition fee to all its students irrespective of their residential country. Students of different online programs in computer science from Penn State’s world campus have landed with jobs in software development, software testing engineer, video game designer and user interface designer.

Is ranked at fourth among the nation’s undergraduate degree program in the United States of America. Their computer software engineering program is certified by ABET. They offer the same tuition fee to all their online course students. Students have succeeded after pursuing this online degree and have landed with jobs in the fields of web applications development, embedded systems, video game development, security, computer systems administration and networking.

offers an ABET certified online computer science degree which is hundred percent online. The U.S News report has ranked the computer science bachelor’s degree at Regis, to be one of the best in the United States of America. Regis also offers a 152 credit dual level combined bachelors and master’s degree in computer science. This course is also provided online. They offer courses like computational foundations, discrete mathematics, web database applications and algorithms and complexity.

offers an online degree in computer science focusing on disciplines like database technology, mobile application software engineering and computer programming. They also have a dedicated course for a bachelor’s degree in software development for gaming. Students often take courses like systems development methods, data structures and algorithms, and design and database management to land up with job offers after completion of the course.

offers an eight-week online course for a degree in computer science. The course is structured for 128 credit-hour and can be taken online completely. Students must study disciplines like software engineering, data structure and analysis of algorithms and discrete structures in this discrete program. The students are offered an internship in any of the above disciplines upon completion of the course before they land up with jobs of computer system architect, software developer, database administrator, and programmer and computer system analyst.

offers a hundred percent online degree course in computer science. The main targets of their accelerated course are non-traditional students and working professionals. People with a background in coding get additional credits for their experience. Working professionals get this degree to get better job opportunities and have often landed with jobs in the profiles of network engineers, software developers, web developers, data scientists, security engineers, project managers, and network architects.

Offers an online degree program where students will have to study subjects like data structures and algorithms, computer architecture and operating systems, web and game programming and development of mobile application.

Is computer science integrated with the future of the education system?

Computer science is ubiquitous in the daily life of all people today. The different web application used for communication, the mobile alarm to wake you up and to complete homework, student’s use the technology offered by computers in every aspect of their lives.

Computer science has become a part and parcel of human life in such a manner that it is concluded that computer science is inseparable from the future of education.

The U.S. Bureau of Labor Statistics reported that over 1.4 million new computer jobs will be available in the market by the end of the year of 2020. However, the only number of suitable and trained people to apply for these new positions is estimated to be around 400,000.

While it can take as long as 25 years to create a computer scientist, and because computer skills have become an integral part of human lives and is required for any job in all industries, the gap in the development of required skill set is expected to emerge as a formidable social, economic, and security justice challenge in the years to come. People at every front of life – parents, teachers, schools and industries should collectively work to address issues like spreading awareness and creating readiness among students, expanding access to diverse curriculum and explore opportunities in the field of computer science and help foster the interest in the subject to ensure that it becomes an integral part of the education a child receives growing up.

Computer science is inseparable from the future of our society

The economic stability and national security of a nation depends on a population with excellent computer science and coding skills to help prevent data piracy. As such, the future of education must focus on making computer science an integral part of every child’s education to ensure that students of all genders and backgrounds have a chance to pursue these opportunities. Computer science has become so integrated with human lives and their future that no course taken in computer science will ever go to waste and will only yield a fruitful future for the person taking the course.

So, stop wasting time pondering over if you should or should not take up the course and just get yourselves registered for an online or even an offline degree course in computer science if the subject tickles your grey cells. The future of computer science is glowing in all its glory and promises a bright future for all individuals pursuing this stream of science for their bachelor’s and master’s degree.

Bina Ramamurthy is an expert on blockchain who is the director of University of Buffalo’s Blockchain ThinkLab. She completed her doctorate in computer science and started her career as a teaching professor of computer science and engineering at the University of Buffalo School of Engineering and Applied Sciences. She teaches an introductory course to students at Buffalo. But her main area of interest off late has been the development of an open online course on blockchain technology that will be globally available to students.